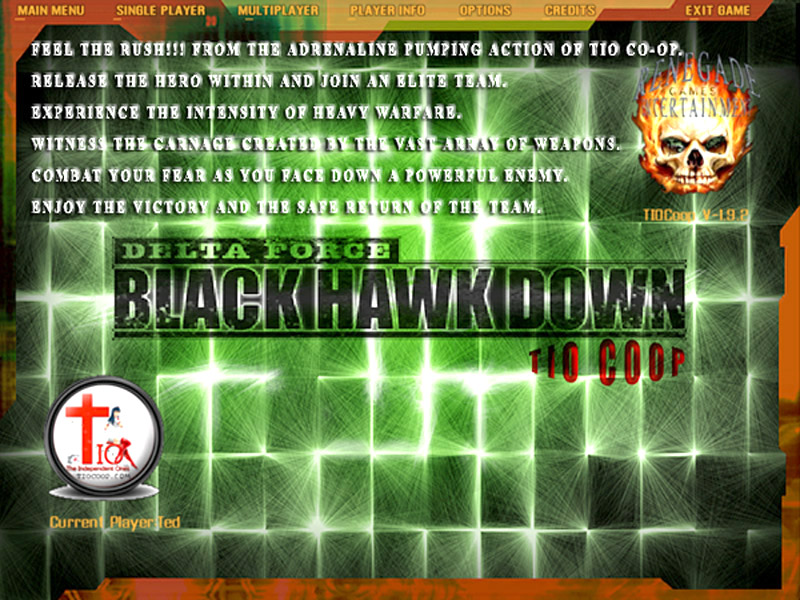 The Mod is designed for “Co-Op Gameplay“. All other game types are available but uneven weapon distribution exists.

If you use the “Medic Mod”, you need to re-move the “Weapon.Def“  file from your game folder or re-name it before you play any of our Mods. (View more info about the “Medic Mod” below in “Related Info” )

If you do not re-move or re-name the “Weapon.Def“ file you will be punted from “TIOcoop Mod” servers.

WHAT TO EXPECT IN THE TIOCOOP92 VERSION

MISSION EDITOR
The Camo Mission Editor was part of the TIOcoop92 but we removed it. It needs more work before it can be used. Your BHD player Character can still be in the correct Camo uniform for the terrain type. Camo change instructions can be found on our web site in a post called HOW TO CHANGE BHD PLAYER CHARACTER CAMO

New AI – There are AI that throw knives, grenades and flashbangs, A deadly flamerthrower AI, Four wounded soldiers laying on the ground with bodies that twist and flinch from the hips. Three skeletons – One all messed up, Three zombies – one crawls, another zombie walks and the other walk/runs real weird.

You will hear many different weapon sounds coming from the AI. Some AI will shoot you and then come up and Tea Bag you. Others will kill you and come over and put a few shots into your corpse for good measure. Another will go prone next to your dead body and shoot your Teammates as they come to Revive you.

EFFECTS
You will see many different FX, All splashes, ripples, wakes, fountains, bubbles and sprays will have a light blue look. Explosions will have thicker smoke, explosion flames will have a different look and shape.

There will be FX giving your map Flying Moths, Butterflies, Fireflies, Mosquitos and Jumping Bugs. Bigger and better electrical sparks, Bigger kill zones for explosions and debris spread to match.

SOUNDS
Most of the original Black Hawk Down sounds have been refreshed and hundreds of new sounds added. Hundreds of dialog waves for SinglePlayer maps.

VEHICLES
Donated to TIO and new to Black Hawk Down is a Mobile Chinook with Armoury and a Mobile Technical with Armoury. (Armoury available for use when vehicle is in motion)

The Large Group of Grass catches fire and burns, leaving a clear field of view.

There is much much more then what is stated above, it’s a mappers paradise and a great revisit for all players, especially for players who enjoy Co-Op.

OBJECTIVE
Our aim with this version is to try and slow down the run and gun style of play and make you use a more tactical approach. Now that the AI are more capable and have weapons to match, your game play has to change. If you advance to fast you will die. We have a “No AI Re-Spawn” policy in our maps made for our TIOcoop92 servers. So once you have battled hard for that ground, it’s yours, no AI re-spawn. Our 92 servers have hundreds of new maps in rotation, all with no AI re-spawn.

CRYSTAL BALL VIEW
If this Mod generated enough interest, we would consider converting it to a Mod for all game type and not just Co-Op.

If you do not re-move or re-name the “Medic Mod” and you try to join a TIOcoop Mod server you will be punted automatically.